Hey, Who's Been Drinking Canada Dry? 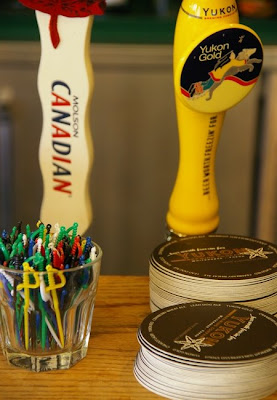 Photographs copyright: DAVID McMAHON
Sometimes my camera is like an extension of my brain. Actually, make that: most times, my camera is like an extension of my brain. So after I'd finished lunch at the High Country Inn in Whithorse, I asked if I could walk around and take some photographs and the ladies behind the bar readily gave me permission to do so.
The little details are all-important sometimes. And while there are some great Yukon souvenir signs on display here, I also had to take the shot above because my eye was drawn to the little cocktail sticks and the variety of colours in the glass. To their right were the distinctive Yukon drinks coasters, while behind them were the bar taps, one bearing the legend "Yukon Gold".
It was very tempting to turn the closer set of coasters anti-clockwise, so that the word "Yukon" was facing the camera - but as you know, I never move objects that I photograph. So I had to go with the cocktail sticks in sharp focus, in the hope that your vision would encompass the other details in the frame.
And just in case you're wondering what the symbol was above the Molson dispenser, here it is ... 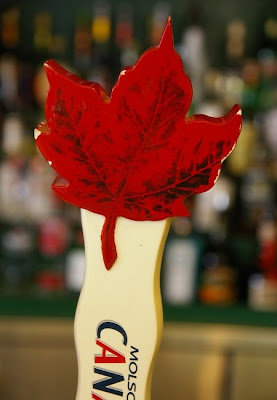 Are you wondering what the bright colours are in the background of the second shot? They're the hues of a huge variety of bottles, alcohol and liqueurs alike.

And no, I don't drink anything stronger than iced water, so if you're really thirsty, go ahead and drink my share.

Even if you only drink iced water, you will have trouble drinking Canada dry...

I'm loving these Canadian posts. When is your next trip over here?

Well, my drinking days are pretty much behind me now too, but I do remember enjoying more than my share of Molsons...

David: A fun title and I like Canada Dry once in a while. I do drink Pepsi so I guess I go one step furthe then you.
I think that Yukon Gold is a neat name.

I don't drink anything stronger than Coke Zero, so I will pass on the firewater too.

They are all little swords! My favourite by far is the last shot. The brightness of the colour against the pale handle of the tap is terrific contrast.
They'll have to drink my share too. Do they do iced tea?

I don't like beer but a bit of rye whiskey with some Canada Dry would be nice. But usually I just prefer water, tea, or coffee. Great shots from your trip - keep 'em comin'

David, have you seen this?

Aw man David I was hoping this would end in "and then I drank everything I took pictures of" and eventually the pictures got progressively blurry and lopsided!

Ok seriously, I continue to enjoy your pics sir.

You never move anything? Doesn't that drive you crazy? I mean, how can you resist?

I first noticed the bit of red and then the yukon pull. So glad the second shot was of the red!
I enjoy your blog so much that I gave you an award.

Who's been drinking Canada dry? Probably my ex-husband.

Yuck, hate that Molson and its skunky taste, but I sure grew to love the Yukon Gold while on our trip this summer. Wish I had a frosty mug right now.