A Blur Of Colour And Motion At Gertie's 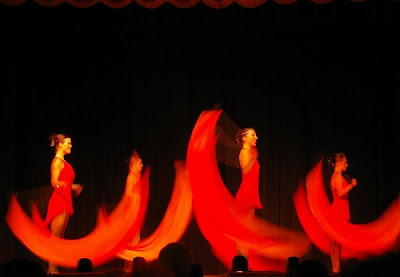 Last week, on my second night at Dawson City, I spent a couple of hours reliving history at Diamond Tooth Gertie’s. In case you haven’t heard of it before, this is a non-profit gambling hall named after Gertrude Lovejoy, famous for wedging a diamond between her teeth during the gold rush of the 1880s. 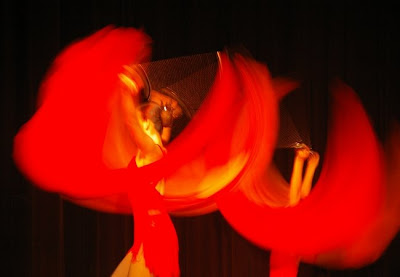 They have three cabaret shows a night at Gertie’s and I guess sitting halfway back down the crowded hall was not the smartest thing I did, especially since I wanted to try and get some unique photographs of the famous show.

The problem here is the level of fitness of the dancers. They move swiftly. Yes, S W I F T L Y. Even using a quick aperture setting, I was barely able to get a shot of them without a shimmering blur.

Next time you come round, I’ll show you my shots of the opening number, where not one of my images of the brightly coloured cancans is up to scratch. But I’m glad I didn’t give up.

I did the best I could under the circumstances. Then, more than halfway through their routine, where the dancers changed costumes just as rapidly as they pirouetted and twirled, my opportunity presented itself without warning. 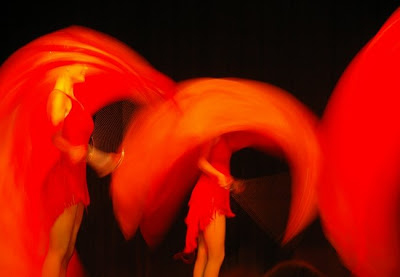 First, two of the dancers bent down and picked up two long, broad sashes. Then the other two did the same.

Suddenly I realised that their speed could be used to great advantage in an unusual series of photographs. The length of the sashes gave me a wonderful opportunity - and all of a sudden I realised that I was actually sitting in a great spot to make use of the lighting, the backdrop, the lightning-quick choreography and the rhythmic motion of the sashes.

Just goes to show - when you think you’re in the worst possible spot to take photographs of something you only see once in a lifetime (hey, how many times do we get to visit the Klondike as guests of Yukon Tourism?) something always comes along to give you a startling opportunity.

I guess the trick is to recognise the opportunity and make the most of it, even when things seem to be going wrong. 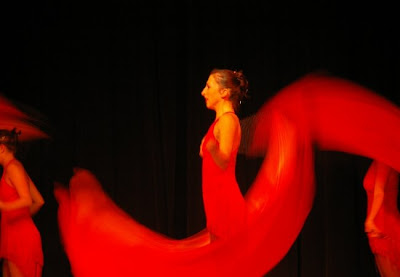 These have to be up at the top of my favorite shots you've snapped.

These are beautiful shots - I love their bright outfits against the black backdrop and the swirls are amazing! :D

And we can rely on you to make the most of an opportunity! These have turned out to be fantastic and a unique take on the dancers. Well done!

Taking shots in theatres are banned for good reason. They are to protect you against disappointing outcomes, based on my own experience. Yours are stunning.

I know nothing about photography, I am a pointer and clicker and a halfway decent camera is next on my list after a halfway decent laptop, but I do know that your work is stunning and for me, this series of photo's are stunning. I would love any one of them, blown up to supersize on the wall of my living room and the 12 pictures up there now could all come down.

Hi,
These are beautiful shots. Thank U for those... :)

well l think they are great, the motion is really captured as well as the speed of the movement...love the red!!!!almost orange in fact...cant wait to see more of your pics...you will enough with over 5000, to keep us returning for MORE>>a treat or two a day!

Oh....the color and motion...all quite 'hot'! Bet it made you want to join them up on stage. Looking at them makes me want to dance with them. Fantastic shots, David!

Looks like the dance of the red Chile Peppers!

There it is again - opportunity chosing you. Gorgeous images, David.

My wife and sister went inside to do the slots, but Ron and I never made it through the door.

Looks like we missed a lot, but the shots are fantastic!

I love the bright red against the black. It really catches the eye!

These shots are spectacular. I would have never guessed anything was amiss without reading your post. They came off splendidly. I'm sure that's partly the creativity of the photographer, but you are right that we always have to work with what we've got and make the best of it.

Oh, I love the color and the motions/emotions. I think maybe these pictures came out just as they were intended to come out. Going with the flow worked well for you. I agree with the others that these are among some of my favorites.

These images are absolutely gorgeous!

Really good photos, full of action and colour. You were lucky that they allowed a photographer in there, though.

Gorgeous photography!
Have you ever tried photographing with a motion picture camera? You would be a great cinematographer too. ;-)

I went through hours of raw material for an interview last night, and kept thinking that it could have been done so much better with some of the lessons you are trying to impart here on your blog.

I bet you dollars to doughnuts these shots are much more visually interesting than the any you managed to capture in perfectly still frame. Kudos, again.

Haven't been commenting much but I have been watching. Really enjoying the Yukon trip and the colour!