Worth Its Wait In Gold

Not Quite The Sunset Shot You'd Expect, Is It? 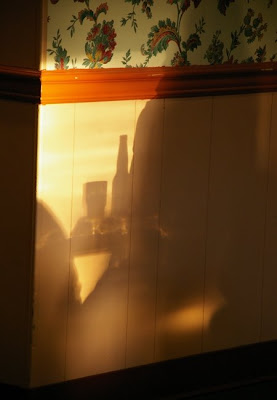 You just never know when a great photo opportunity is going to come your way. And sometimes when a great chance appears, it remains for only a few fleeting moments, never to re-appear.

I was in the dining area of the Westmark Hotel in Beaver Creek in the Yukon - and as always, I had my cameras within arm's reach. There was a lady a couple of table away from me and I knew she was waiting for her husband to join her at dinner, because I had seen them a few minutes earlier, in the hotel corridor.

For a couple of minutes, I saw a shadow on the wooden wall, just below the wallpaper at waist level. It was the shadow of her glass and the beer bottle and as I watched, the shadow grew more defined as the sun pierced the late-evening cloud.

I knew if I didn't take the shot, the angle of the sun would quickly change. I picked up my Pentax K100D and hit the shutter once. A few moments later, the lady's husband joined her. He sat opposite her and blocked the shadow. Had I not followed my instinct and captured the scene, I would have lost the opportunity.

I never seem to have my camera with me when something like that happens. That was a really good photo. An opportune moment!

Ah McCain (I mean McMahon) you've done it again. I'm just waiting for the sun to be in the right spot as it is in summer because it reflects my colonial windows on my bedroom wall and makes it look like a Paris artist's garret. It will look pretty when the sun manages to move over a tad to the left . .hold it . .hold it . .snap!

One of my favorite subjects is the shadows and reflections of the late day sun.

Lovely shot. I almost always have my camera with me, but far more often than not, I'm too shy to use it in a situation like that.

What a great shot! Very brilliant... I, too, don't seem to have my camera around when something like this good happen.

My PSF is posted here. Please pass by if you have time. Happy weekends!

It's a gorgeous shot, David. Very pensive in nature.

Very VERY cool. I think you're my inspiration. I love trying to get pictures of things others might not necessarily see the beauty in otherwise, but I seriously need to learn how to use my camera better! Yours, as always, are incredible and no matter how dense or uncaring one might be, the beauty can't be missed.

Good eye! I love photographs of shadows. They speak volumes.

THAT is a lovely shot-- I'd frame it and let my mind make up a new story for it every day :-)

Not really,but this I like very much.Have a nice day!

One of the coolest sunsets I've seen! Great capture David! The shadow is so crisp and clean too!

Straight to Your Hart said...

What an awesome candid shot!!

Ah, life is but a tightrope between opportunities snatched and those lost.
Is this the beginning of the third chapter?

This is a wonderful shot. Love the story behind it, and how you followed your instincts.

Take it while you can has become my motto or my mantra. That way you have no regrets. Great photo.

I LOVE this. It's one of my favorite photos yet. I love shadows, and I have a cool shadow in my house from time to time (from bottles and vases and flowers in a tall window), but it only comes when a car is parked in just the right place outside and the sun hits the windshield and it shines up under the roof of my porch. But my light is "cool." It could never happen in the warm evening sun. I've photographed my wall, but it is NOTHING like this. Always good to act quickly on those instincts!

Great lesson.
(Now just looking under the table for my courage, which is where it dives in those "public" moments!)

I love the way the light plays with the image. My son is very into shadows right now, so i have a special appreciation for it.

I just love shadow shots. Great catch David. And Happy PhotoStory Friday (even though Friday is well over for you by now!)

SUCH a cool shot...so glad you followed your brilliant instinct!

now that is one cool shot. something very poetic about the short lived peace of a quite sunset and nice cold longneck....

That's cool! What a stroke of good fortune!