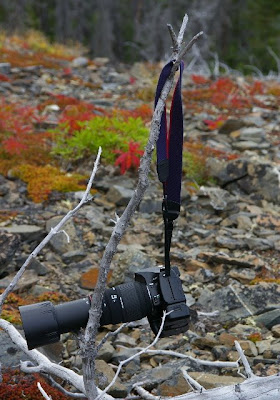 Sometimes, just sometimes, a photographer has to put his cameras down. On Monday I had the privilege of being taken on a hike into Kluane National Park, which is a UNESCO World Heritage Site.

Our guide for the day was Brent Liddle of Kluane Ecotours and I reckon that I lagged behind the group for most of the day, simply because I kept stopping to take photographs every few seconds.

This shot was taken on a rocky outcrop just before we turned back and let me tell you, the views were simply stunning. As we sat there, eating our lunch in the silence of the mountainous region, we were truly blessed with our surroundings.

Behind us we had a rocky peak with fresh early-autumn snow. To our left we had a mountain range shielding Canada's highest peak, Mount Logan, from view. In front of us, we had the shimmering expanse of Lake Kathleen.

While the rest of the group sat there, getting their breath back, I simply had to keep shooting because the view were simply priceless. Regretfully, I had to eat too, and the thought of the salmon and cream cheese bagel could not be ignored for much longer.

It was one of those rare moments on this six-day trip organised by Yukon Tourism when I actually had to put both my cameras down. But where's a bloke to put his cameras when you're in the wilderness?

On the wet grass? Naaaah. On the shale? Nope. On the rocks? Never. (My love affair with photography will never be on the rocks!)

That's when I spotted this dead tree trunk on the slope beside me. My Pentax K100D with the 18-125mm lens was soon nestled into the dry bark, suported by a gnarly branch. And the Pentax K200D with my 70-300mm lens soon found an equally inventive place, suspended by its strap from the fork in a strong branch.

But I simply couldn't resist the impulse that soon overtook me. I temporarily (only temporarily, mind you) deserted the delicious bagel and picked up my K100D. I simply had to shoot the other camera, secure in its inventive spot.

I took about a dozen shots, all up. The first one (above) was taken while standing over and slightly to the left of the fallen branch, to make full use of the splashes of autumn foliage. And the shot below was taken from a different angle to make best use of the snowy peak in the background.

The Yukon's like that. You don't have to go searching for a great angle. The real problem is choosing which of the stunning sights you're going to capture. 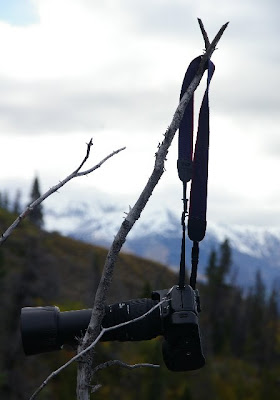 Posted by david mcmahon at 6:00 PM

Necessity is the mother of invention! Welcome home David, hope you've got on top of the jetlag. What a marvellous experience this trip must have been, and I am sure you have captured much of it to share and delight us with. I look forward to hearing of your adventures.

What a wonderful way you weave those words around the photograph(s). A very inventive and safe haven for those cameras. And now there is evidence that you put at least ONE of your cameras down... ;0)

that's fantastic. those national parks are amazing, so much beauty

I knew you couldn't put the bagel down for long David.

Canada is so beautiful. I enjoyed catching up with your photos.

You simply amaze me, David! Taking a picture of your camera resting while on your lunch break is quite a hoot!

Salmon and cream cheese? Hmmm... I'll have to try that; it sounds delicious!

You are just so darn creative, David! I love the photos, the story, your writing....but oh, I love the titles!

you have amazing talent D M !!

Can I have your day job??

A bagel w/lox and a smear ... hard to compare with those views and your clever resourceful camera hanger(s).

Lana got lots of photos during our recent experience. I'm sure she'll be posting them soon.

David you are so clever...and you make me laugh. For some reason Twig or Tweat sent me into some I-haven't-had-enough-sleep-in-a-week giggles. I know. I am a dork. :)

So simple and yet, so stunning.

Gee David, that is one long lens. When my dad took us backpacking back with I was a teen he carried about 8 pounds of camera gear around his neck. How much do your cameras weigh?

Very nice shot. I liked the way the camera stood out from the background but didn't diminish the colors and interesting ground behind it, rocks, ground cover. Very nice!

Oh David. I'm almost busting with pride with the beauty of my country. However - I think it takes a master like you to bring hat beauty to the world and to remind me of it once again.

I don't know if you saw my comment about Vegemite Vindaloo earlier. But I just wanted to say that not only are you a master photographer - but you are a master storyteller.

I have followed Steve and Hilary to Australia and am meeting Wally. I have felt time and again like I was right there David and just wanted to turn around and hug you. I do love a great story and have huge feelings well up inside of me for the storyteller because of it. So here's a huge hug for you and a quiet 'thank you'. It's quiet because I'm so tired from staying up all night and reading!

Great story and the photos are just cool! The view behind the second is quite beautiful!

David: What neat shots of the camera branches.

Had a horrible feeling you were going to say that you walked on & left them on the tree! Nah..... that would never happen, would it?

Love the shots. The colors in the first one attract me, and everything about the second one is good. But did your fellow travelers/guides ever wonder if you were a bit crazy?

Erm am I the only one that thinks it slightly ironic, and very funny, that the photographer takes a photo of his camera whilst amid the wilderness of the Yukon? You're a tease . . more photos of the environment please! (My what a big lens you have!)

A real photographer never runs out of things to photograph.

AHA! Caught you! Now I know what the bear smelled...it was that ding danged salmon and cream cheese bagel! What did I tell you! NEVER go into a bear's home smelling of sweeties and fish! When I first saw the photo I laughed thinking "this is where David dropped his camera while running from Grizzly "Adams" McBear...salmon and cream cheese on a bagel...though the bear would have preferred it on a beagle, I'm thinking!
Sandi

Very innovative, but I expect no less from you! The second shot is amazing. closest thing I have to compare are the Rockies in Colorado.

Cool pictures and great perspective! With problems like those, life must be AOK!

And , that my friend, is why you are such a good photographer...I would have been interested in the lunch and not considered what an awesome picture this would be....and it is.....

And , that my friend, is why you are such a good photographer...I would have been interested in the lunch and not considered what an awesome picture this would be....and it is.....and a writer as I well. I am very glad I found you...