That Is One Beautiful Rust Bucket 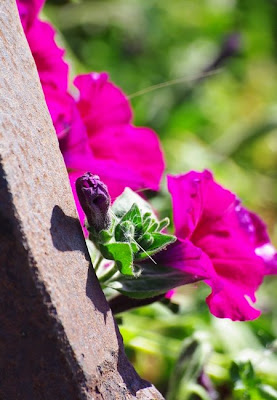 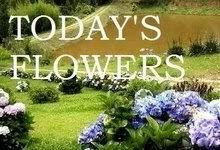 A couple of weeks ago, I was in Alaska for a few hours, traversing the Top of The World Highway as we looped back into the Yukon. This was taken when we made a brief stop at the tiny settlement of Chicken, just past the US-Canada border at Poker Creek.

But a photographer never rests. There are too many sights to shoot, too many visions of beauty to capture. I opted for the Pentax K200D with my long lens (the Sigma 70-300mm) to take the shots of the biplane kite that can be seen at Soar Point.

I was just walking away when I noticed an unusual sight. I am an avid gardener and I'm accustomed to seeing flowers blooming in some very creative spots. But the sights of these healthy petunias in a large, rusty bucket caught my eye immediately.

I'd seen the buckets lined up alongside the SS Klondike in Whitehorse, and I'd seen them at several places during this week-long trip organised by Yukon Tourism. The heavy metal objects, of course, are disused dredge buckets, which are such a common sight along the gold trail in this part of the world.

I should have used my Pentax K100D with the 18-125 Sigma lens, but as I walked, I just hit the shutter on the K200D with the long lens. I shot three frames, very quickly, in the bright midday sun. My main focus in this particular frame was the fresh bud and its clear-cut shadow. I wanted to try and use the harsh light and the corroded surface of the dredge bucket to emphasise the sight of Nature's beauty surrounded by rust.

This is just a low-res version of the shot, but on the high-res original you can actually see the delicate white fibres that are so common to petunia buds and that give the blooms and leaves that unique sticky feeling.

I used the gentle diagonal slope of the bucket's left-hand edge and the deep shadow on its outer lip, facing away from the sun, as added value for the foreground, while the composition allowed me to use the soft colours and purples spikes of the other blooms as an interesting background.

Also, when you think about it, you don't often get the chance to photograph a flower's shadow on metal in such close proximity.

Visit Luiz Santilli Jr for the home of Today's Flowers.

Posted by david mcmahon at 9:00 AM

It is a bit Beauty and the Beast.

I think Petunias may be my favorite flower. They want little and give much. Lovely rust bucket...well decorated.
Sandi

I love the flower and the angle you took the photo!

Beautiful flower and the color is so intense.

Glad that you were able to see the beauty in the rusty bucket. Some people would have just kept on walking. I have been paying much more attention to shadows lately as I walk around with my trusty point and shoot camera!

I love the title for this one. I'm not just anyone would "get" that.

Rust is attractive, but I'm impressed with what you did with the harsh lighting. Very nice!

A cast-off, very utilitarian item (dredge bucket) has become a thing of beauty though the eyes of a pretty swell photographer. (Does the word "swell" give away my age? I don't care!)

Thanks, too for the 'lesson.'

I like this photo of flowers -- the color and the way the sun shines on it. Beautiful.

Luiz invited me to join so here I am! I have my first post up for this meme.

Your translucent flower is simply stunning! I like the shadow also. Come and see my simple but beautiful Cosmos.

Have a nice week,

Beautiful and nice angle shot!~My first time to join with this Meme! I hope you can drop by! Mine is here. Happy TF!~

Excellent shot, especially as it was unplanned, not the lens you would "choose" etc. I love the colours against the stony grey.

I played to but it is on my other blog, Cath's Cradle which is here.

David: A wonderful capture of the old and new.

That kind of contrast is always startling and often beautiful.. especially if seen through the lens of YOUR camera.