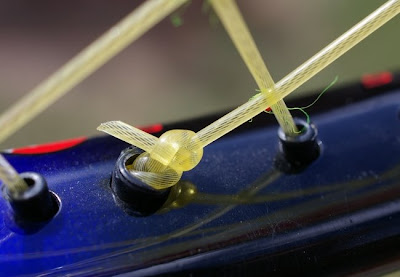 This sequence was shot some weeks ago, using the wonderful SMC Pentax-DA 1:2.8mm macro lens. I thought these would be perfect for this week's "string" theme, especially since I used to cover Wimbledon as a tennis writer.
You know the strings that criss-cross your tennis racquet? There was a story that Bjorn Borg's Donnay racquets used to be strung to such high tension that it was not uncommon for them to snap in the middle of the night, even before he had struck a ball with them.
Every grand slam tournament has its own racquet stringers and I once read an interview with a man who did the job at the Australian Open. He mentioned that players' representatives simply used to drop the racquets off to him, but occasionally one or two of the stars would drop by to thank him for a job well done.
The racquet in these shots is just a standard Wilson - and I took the shots in our front yard, not in a studio. I simply wanted to test the lens in normal conditions. That's why I started out by shooting the tiny knot that shows the end point of the racquet-stringing technique.
I thought the lens was really good, because it even showed up specks of dust on the racquet frame, so then I started shooting the mid-section of the stringed surface. 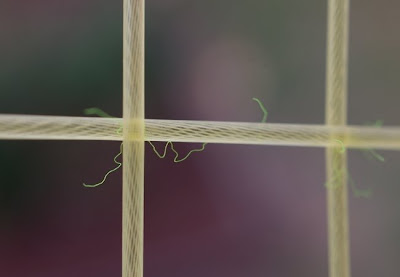 That's when I noticed something that I hadn't spotted with the naked eye. The magnificent lens was actually picking up minuscule pieces of fluff from the yellow Slazenger balls that I use.
Look carefully and you'll even see the light-and-dark pattern of the synthetic material that is used to string these racquets. And when I sat down to write this post, I recalled an interesting piece of tennis trivia. You see, yellow balls were introduced to make it easier for television viewers to follow the path of a ball on their screen.
So here's a trivia question, specially for you. Do you know when Wimbledon finally switched from white tennis balls to yellow tennis balls? Scroll to the bottom of this post for the answer. 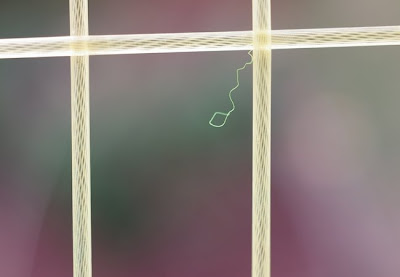 A delightful look down memory lane--mini-memories.

As always, it is still Friday here, but I have some important strings scheduled for midnight Pacific Time.

Those shots are amazing. What a great camera!

Makes me stop and think about all the minuscule particles that are all around us and I never pay attention to them - which, at times, is probably a good thing! I love the clarity of these pictures - they look surreal. Once again, I have camera envy!

I used to love those matches between Borg and McEnroe. They were not played at quite the pace of the modern game, but with just as much emotion and energy. My wife still has a wooden racket, which the kids looked at in incredulity the other week.

Lovely shots, and I got to learn some new things too! Always nice to stop by, and happy photo hunting!

Liked your heading! And what about the lovely colours in the background of the slats?

Was it really as late as '86? Doesn't time just play tricks.

Two or three things I love about this post -
1. You mention Bjorn Borg. My hero. I don't care if you only mentioned him in passing, you mentioned him and that will always trigger great memories for me of Wimbledon.
2. You can spell racquet!!! Dang it has a red line under it too, but it's the right spelling!
3. I love how that lens not only picked up the fluff, but also was powerful enough to be IN focus to the left of the shot (of the middle of the racquet) but losing the focus slightly just to the right of the knot. A brilliantly clear shot.

Sorry - not the right of the knot. I just looked again. I am talking about the middle photo. The focus is clear on the point you obviously chose, but is slightly gone to the right - to me a sense of a really powerful and precise lens (and photographer's eye of course!)
I can see the dark and light on the string too.

Incredible shots! I had no idea about Wimbeldon.

Great shots and I like how you can see the yellow fluff stuff. I can hardly wait until I get the go-ahead to start playing again. Mine's up at Photologue rather than Pedalogue! :D

Awesome story and awesome pictures. I haven't followed tennis recently, but I remember the glory days of the 70's. Happy hunting!

Exciting this is what makes picture taking exciting

Some lens you have there buddy. Great idea and fabulous execution.
I hope you enjoyed your visit to the Yukon, I enjoyed seeing myself, having never been up there although I have been to Alaska.

I beg your pardon David, but is this a camera or a microscope? Just asking...
Sandi

Oh you'd be surprised what I spy with my little myopic eyes when I take off my glasses :-) (as long as I have the object in question against my nose).

That is a very nice entry David...Happy weekend..

p/s: My mom was recently in Melbourne, I asked her for a favour to get me your book from the book stores there. But she couldn't find it anywhere :(
It's not available in SG as well.
Where can I get it from? Only on-line?

That's a great shot. and perfect for the theme :)

It is amazing what the lens will see, isn't it? A lovely surprise sometimes, too. Smile.

Awesome shots. My fave is the first one. Good choice. :)

My strings are strung and strummed...come join me if you can find some time today! Happy Hunting!!!

Those are truly awesome photos. Who knew strings could be so interesting? Thanks!

Nice! The first is my favorite...

I love your shots!
I can confirm that your story about Björn Borg´s tennis racquets is true (we played on the same tennis court).
I wish you a great weekend.

These are really great! Nice choices for the theme!

Do stop by when you can -
http://flamingofotos.blogspot.com

Outstanding! Such a creative take on strings. Very clever.

I went a completely different route with it (think girlie).

great photo's great post!
view mine if you wish here thanks...

That is really cool! Amazing images! That is why I love macro ~taking close~ups of my garden, flowers, & visitors I see things I would have never noticed with the naked eye! Beautiful captures~love the beautiful colors in the background!
Enjoy your day!
Cat

Great photos! Have a good weekend.

I enjoyed your string post this week. Great shots.

Most enjoyable to read, as already said a delightful look down memory lane.

great choice for the theme. That certainly is a fine lens. love to see the fuzz. :)
happy weekend.

Wow... love your photos! All of them!! The close up shots of your strings are amazingly clear... unfortunately my camera died last month and I'm going to have to get myself a new one soon!

Love the other photos too though, going to have to come back to visit your blog again! ;)

Have a super Sunday!!

WOuld love to have all the cool lenses and take awesome close-up shots! Thanks for the trivia.