Alas, The Triplane Ain't My Plane 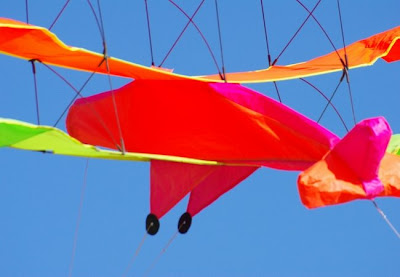 Last week, I was in Alaska for a few hours, taking the Top Of The World Highway back down into Canada and the Yukon. We pulled into Chicken, which is less than 40 miles from the border at Poker Creek, fo a quick lunch stop.
There I watched a man on a quad bike traverse a flat area near the picnic gazebo. Behind him on the bike he had three children, and one of them was flying this beautiful kite. Its bright colours caught my eyes, but I didn't immediately realise that the kite was in the shape of a World War I triplane.
It was so evocative of the Charles M. Schulz cartoons of Snoopy with his leather helmet, picturing himself as a World War I air ace, taking to the skies against the Red Baron.
Before I could approach the group to ask if the kite was home-made, the father left on the quad bike, blowing kisses and calling out "Love you" to the children.
Unfortunately, strangers can no longer approach children and strike up a conversation with them. But as they ran as fast as their legs would carry them, the kite bobbing up and down in the clear sky behind them, I was able to take these shots with my 300mm lens.
What I really wanted to tell them was to follow their dreams. To tell them that I was a kid once. To tell them that I used to fly kites. To tell them that I dreamed about becoming a novelist. To tell them that when I wrote my first novel, it would include a short but significant segment about a child flying a kite.
More than anything else, I wanted to tell the children in Chicken, Alaska, that dreams can come true, just as the human spirit can soar. 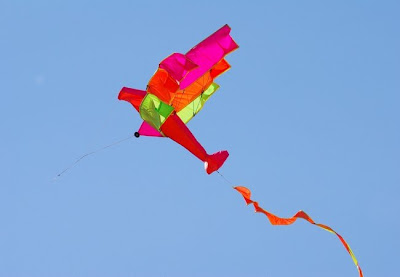 Stunning shots....You are drawn to colour in your photography, like a dog to water (apologies for the analogy).

I too adore colour and am 'sad' without it, especially as Cumbria isnt blessed with bright or sunny weather!

You make me tear up, not only for your stunning pictures, but for the beauty in your soul, and for the sadness of today's world, where good intentions are suspect.

Thankyou for your kind comments.
Annie.

You made the tears prick there. That is one of the best and most beautiful photostories you have composed. (Have I said this before? Maybe I say it every week...lol)

And I agree. It is a sad world where you cannot approach a child and share your dreams and theirs. Sad indeed. I hope their dad reads blogs. ;0)

Fantastic photograph! You are very right about following your dreams. If you don't believe in youself, no-one else will believe in you!

What a beautiful story and beautiful photographs. The colours are amazing!

Beautiful kite! I'd love to have one like that.

That WAS a lovely story and photo to go with it. I think it is a great pity that we have to shut ourselves away from other people's children just in case the wrong intentions would be interpreted. (And they probably would!) However I think what you would have LIKED to tell them was a really wonderful thing & it brought a lump into my throat!
it's NEVER too late to follow your dreams & I hope that the children you were watching, do follow theirs.

What beautiful thoughts. Thanks for sharing that.

Oh Wow. At first, I thought that was an illustration and not a photo because it is so vibrant agains that beautiful sky!

David, you capture such beautiful images with your words and your camera. Your photos always tell me such a great story, but my goodness you have a way with words as well!

Oh, and once again, LOVE the title of this post!

Amazing colors in the photos - the story is sad, necessary, true, and sad.

Love that kite. I would have loved something like that so much when I was a kid.

Even with just a kite, life is worth celebrating, isn't it David?
Jo

Indeed - following our dreams is what we should all do. I loved the kite flying segment in Vegemite Vindaloo.

this is a very sweet story David.
But Chicken, Alaska?? I had to read that twice ;-)

WOW! That first photo really jumps out at ya. I love it!

Maybe someone in Chicken, AK will see this post and learn of how you felt. That is a very neat kite.