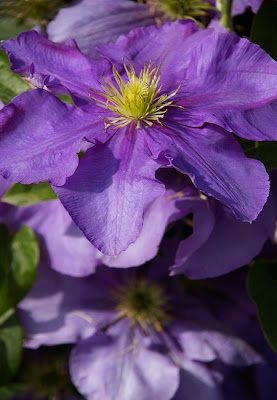 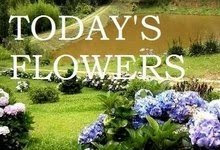 Shortly after the near-embarrassing situation described in the post The Charge Of The Flight Brigade, Bill Holmes of the Dawson City Visitors' Association advised me to buy a set of long-life lithium batteries (for extra backup) and a Canadian-voltage battery charger.

We had a great lunch together at Klondike Kate's and then, on Bill's advice, I headed to Peabody's Photo Parlor. I explained to the lady there how I had not one but two Pentax DSLRs with me and how both sets of batteries had died shortly after takeoff that morning - because I had been using an Australian-voltage charger.

She was very helpful, and we shared a chuckle about how lucky I was (or how well prepared I was for any eventuality) to carry spare batteries. Then she advised me on the relative merits of two different chargers and nodded when I opted for the Sony unit. I paid for my purchases and carefully kept the paper packet so that I would remember the name of the store.

Just before I sat down to write this post, I could not find the paper packet anywhere. (It's somewhere safe and logical and it will turn up eventually!) So I had to email Bill to ask him the name of the camera store - and he replied immediately.

So then next time you visit Peabody's, say a big Australian "G'day" to the lady behind the counter. And don't forget to photograph the flower boxes outside the store, on the boardwalk.

And if anyone can tell me the name of the lilac bloom in the first shot, I would be extremely grateful. 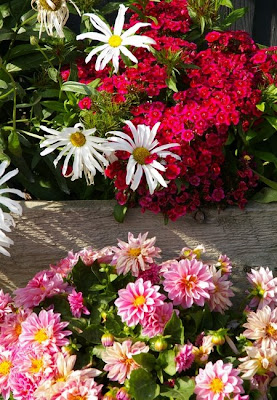 Visit Luiz Santilli Jr for the home of Today's Flowers.

Posted by david mcmahon at 9:00 AM

that top one looks like a clematis to me...provided it was on a climbing vine.

I don't know the name of the flower, but appreciate it's beauty, and the ones in the second shot. You always have such a good tale to tell with your photos.

I am glad I am not the only one who puts things in "safe places". I am chuckling away at that one - my family dread hearing me say I have put something away in a "safe place". It could be missing for years!

I would have to say that is a clematis. I have a huge plant that wraps around a birdfeeder outside my kitchen window. Beatiful!

All are great flowers, but I love the purple one! It looks so beautiful!

My flower photo is now posted here. Have a great week ahead!

Love the first one very much but I also don't know the name of it.

It is a clematis, they come in all sorts of colours and varieties. As always I enjoy your anecdotes and photos.

David: Cool story and we have the same problems when going to Europe. The flowers are very nice.

Sure looks like a clematis, but if it grew in a window box and not on a vine, I'm not so sure.

I'm quite sure that is Clematis (pronounced Cle-MAT-is in the South and CLEMatis in the North and a lovely one at that! We call those safe places we put stuff so we'll be sure to find them "The Twilight Zone". Fun post!
Sandi

Beautiful shots, David, and as always a great story to go with.

Beautiful flowers and flower boxes. The first flower is a clematis, and a gorgeous one, at that.

I am glad to know that I am not the only one who forgets where the safe place is - but it always makes me chuckle when I find the 'item' -when I least expect it and when I no longer need it.
Beautiful flowers!

Looks like a clematis to me. A beautiful specimen, too!

Everyone is correct - it is a clematis and this one is gorgeous! I even enjoy photographing the back of them.
Seems you put things in VERY safe keeping. :)

YUP! That is one beautiful Clematis -- they also come in pink and white but mostly I see purple ones. It is kinda late in the season for it to be blooming . . . well, anyway for the ones I know of in WA state. They grow beautifully on a trellis.

I have a flower posted too --come and see it.

Those Canadians sure are friendly aren't they??

And yes, it's definitely a Clematis. My guess is Celmatis Jackmanii. My mom says the Jackmanii is an older variety of Clematis which would more likely be found in the Yukon.

(And btw - we have something very simliar in our garden... I should post a photo for you!)

I just posted some of my Clematis for you David. Come see them here!

Beautiful flowers, the first in the color purple, is to take your breath, great job. I thank you for sharing with us so much beauty.

Wonderful flowers, colors fantastic!
Thanks for posting in TODAY'S FLOWERS!

so so lovely the commentary too sandy

Anonymous said...
This comment has been removed by a blog administrator.
8:50 PM

Anonymous said...
This comment has been removed by a blog administrator.
8:11 PM