Or Maybe Take A Fireweed Chopper Instead 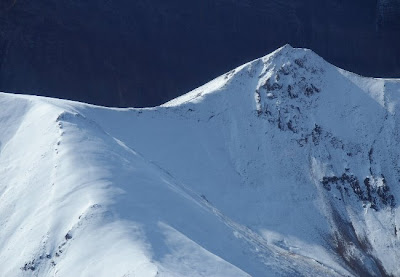 Photographs copyright: DAVID McMAHON
Sometimes when you're fortunate enough to be invited to a place like the Yukon, it's hard to pick one solitary highlight from an itinerary that includes many phenomenal experiences. But when Yukon Tourism organised a chopper ride out of Dawson City, I knew I was going to have a couple of hours I would never forget.
At this point, I'd just like to point out that snow-capped mountains have always been a part of my life, because I went to a boarding school in the Himalayan town of Darjeeling. But a chopper ride over the mountains is something else.
How often do you get to fly over mountains and photograph them, looking down from above? I was given the front seat, alongside the pilot - and I have to say I have never shot so many images in such a short space of time.
Give a man two cameras, two Sigma lenses, a chopper, a great pilot and a mountain range - and there's not much else that Nature can do to top that. 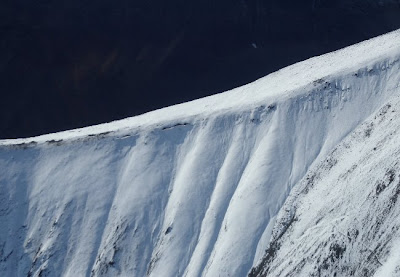 I was also extremely lucky with the weather. As all the locals told me, it was the first weekend all summer that the weather had been so clear right through. There were a couple of wispy clouds around the highest peaks, but they disappeared quickly into the clear blue sky.
Here's something interesting to ponder. I took both these shots with my 300mm lens, and when I reviewed the photos at the end of a very long day, I was intrigued by the very deep blue in the background of both images. The sky had indeed been blue - but it had not been the dark cobalt that you can see in the background.
Gradually, in the next few minutes, I began to realise what the answer was. We had been flying so high that I had actually been shooting downwards, onto the peak in the first shot and onto the ridge in the second.
You see, the dark blue (almost a midnight blue, if you ask me) was actually the foothills of the surrounding peaks.
That's what happens when you train your lens down on a mountain, instead of up towards it. Have a look at this final shot and you'll see what I mean about the varying shades of blue. 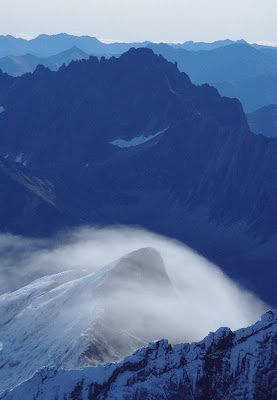 what an exciting opportunity indeed! wow!

I can't rival the Himalayas or the Yukon, but I used to take a lot of photos in the Alps and I found that mountains are best photographed when there are clouds about, unless one wants a pure mountain portrait.

Those are AWESOME shots, David. What an incredible experience, to go up in a chopper and see the mountains from above. Were you shooting through a window or straight out? I love all the shades of blue. Very cool.

I posted about you today on my site. :o)

David, I feel so priviledged that you are sharing these images with us with me! as soon as they are taken almost....wow what an experience the chopper ride must have been...and its the blue images that are so striking...just uber awesome!!

The last shot is FABULOUS!!!

Daid is it ok to use one of your images as a screen saver..l'll tell myself everytime l open the laptop that its your image!!LOL

That last image is just amazing.. lucky, talented you!

Fantastic. I can just imagine how exciting this trip is for you. Enjoy all of it!

I've always wanted to go up in a chopper...if this is just a sampling of your photos, WOW! The Yukon will be mighty proud that they hired you! :D

That last photo is one of the most beautiful photos I have ever seen. It looks like a Tony Onley painting.

We do have some incredible country don't we David!

Watched a movie the other night and thought of you all the way through it.

It was called: The Namesake

'Give a [me] two cameras, two Sigma lenses, a chopper, a great pilot and a mountain range' and steer well clear because we're all clipped together with elastic something's gonna fall out!

Wow David, that is just breathtaking. You can almost feel the cool air. Beautiful.

Brilliant images! Thanks for sharing them.

Totally awesome shots of truly fabulous scenery.My word, is there no end to your talents? And a nice guy too, as your friendly and accesable blog proves.

David fantastic piccies, but I adore the final one - just stunning and oh what an opportunity indeed.

Absolutely breathtaking images. I love the mountains, and I am so jealous...

Now that you mention it, I can see that the blue is another mountain. I can just see the graininess of the terrain, rather than the sky if you know what I mean. But I needed it pointing out.

An excellent opportunity which you made the most of. As always! Great shots.

VERY nice photos, David. You've managed to capture the excitement of a snow covered mountain ridge nicely. I like picture number 2 of the ridge best of those two. That 3rd shot with the snow blowing off the mountain top is interesting enough to frame and hang on a gallery wall. Well done!

David, those shots are breathtaking. I can see why you get the gigs...Peace - D

Once again, thanks for helping to make this world seem that much smaller by sharing these incredible photos of places I have only dreamed about visiting. I love these 'virtual' tours! Enjoy!

oWhat incredible shots. You are so lucky, but seems like you probably deserve it because you make the very best of it!

Oooo..... these are lovely. Riding in a helicopter is a fabulous thing. And how lucky you were to go on a ride into these mountains. Thanks for taking us with you. I'm so envious. *sigh*

Wow, these shots are spectacular David. You sure do get around, don't you? (Not that I'm jealous of course, as if..)

Huh, I was wondering how you got that dark effect. Good ole nature.

and yes, what darl said, "Jealous!"

You just can't beat that last shot, with the wisp of clouds arching over the peak.

Cool photos and this sounds like an exciting trip.

These pictures make me feel cool for the first time in weeks...I even have a little gooseflesh...what wonderful country we have up North...lovely shots!
Sandi

What an awesome opportunity you had. Wonderful shots!

Yes a chopper ride over mountains is something else.

Today after reading your post I am reminded of the chopper ride my pilot friends of IAF had treated me to. I sat alongside the co-pilot, but the sad part of that story is I didn't have a camera then. :(

They flew me over the Changu lake and it was like looking down to a mirror/glass on the snow covered ground below. Sweet memories rekindled. Thanks! :)